Head of Computational Genomics Laboratory (http://comgen.pl)
Insitute of Molecular Biology and Biotechnology
Faculty of Biology
Adam Mickiewicz University
Poznan, Poland
A brief Biography: Wojtek Karlowski is a head of the Computational Genomics group at the Institute of Molecular Biology and Biotechnology Poznan University. He graduated and obtained his PhD in molecular biology and primary was involved in research on symbiotic interactions between bacteria and plants. During his first postodc at UCLA in Los Angeles, California he continued the work on plant biology. Since the visit at MIPS in Munich, Germany, he switched his interests toward plant genomics and bioinformatics analyses. In 2008 he obtained DSc degree and established his own group (http://comgen.pl) at the Institute of Molecular Biology and Biotechnology, focusing on analysis of high-throughput sequencing data and genomic annotations. 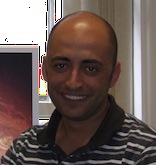 A brief Biography: Mario Fares-Riaño is Professor and head of the evolutionary Genetics and Bioinformatics group in the Department of Genetics in TCD.  He graduated in Biology (1997) from the University of Valencia in his home country, Spain.  After culminating a PhD on the molecular basis of the bacterial symbiosis with insects.  Since 2004, Dr Fares has submerged himself in the investigation of the evolutionary and molecular basis underlying the emergence of ecological adaptations in bacteria and biological complexity, publishing more than 50 high-impact, international, peer-reviewed scientific articles.

A brief Biography: Dr Andrey Kajava holds a position of Director of Research at the Centre National de la Recherche Scientifique (CNRS) in France. He is a head of Structural Bioinformatics and Molecular Modeling group at the Centre de Recherche de Biochimie Macromoléculaire (Montpellier, France). In the past, he conducted research in several prestigious laboratories in Russia, Germany, Belgium, Switzerland and United States. His group is using methods of theoretical structural biology and bioinformatics to understand principles of protein structures and biomolecular interactions. The obtained knowledge is applied for prediction of protein structures and functions, drug design, as well as for de novo design of proteins. Topics of our particular interest are: proteins with tandem repeats, amyloids and prions. The results of his work can be applied in materials science, biotechnology, nanotechnology and medicine.